The Sun Trolley is now offering guided tours on the third Saturday of each month beginning Saturday, October 21, 2017.

Whether you are a long-time Broward County resident or are visiting South Florida for the first time, this two-hour guided tour is your ultimate backstage pass to the “Venice of the Americas.” Tour participants will learn about Fort Lauderdale’s rich history, nature, nightlife and some of the most eclectic neighborhoods, as well as Fort Lauderdale’s fast growth and exciting upcoming projects.

“Our charming red and yellow trolleys have become a Fort Lauderdale icon,” said Robyn Chiarelli, Executive Director of the Downtown Fort Lauderdale Transportation Management Association. “The goal of our new guided tours is to create a fun and educational experience for our guests as they learn more about Fort Lauderdale and all it has to offer.”

The guided tours will run from 10 a.m. to noon. Guests will board the trolley at The Galleria at Fort Lauderdale and visit various points of interest such as the FATVillage/MASS District, Historic Sistrunk, the Broward Center for the Performing Arts, Fort Lauderdale Beach, Hugh Taylor Birch State Park, and many more!

Tour tickets are $38 per person and $24 for each child under 12 years old. Infants under 2 years old ride free. Click here to purchase tickets. Please arrive 30 minutes prior to departure, as the trolley will leave promptly at 10 a.m. Please note that the tour’s end time might vary due to traffic, events, and unexpected circumstances.

Click here to learn more about Sun Trolley and its guided tours, or call 954-TROLLEY. Like what Sun Trolley is doing? Show it here.

Alan Hooper, Chair of the Downtown Fort Lauderdale Transportation Management Association (TMA) Board of Directors, has been selected as one of three finalists for Non-Profit Board Leader of the Year in the 7th Annual Community Care Plan Non-Profit Awards presented by 2-1-1 Broward.

The winner will be announced Friday, February 24, 2017 at an awards ceremony and luncheon at Signature Grand in Davie, Florida. Winners will receive a $1,000 grant to their organization, and up to two finalists will each receive a $500 grant. Finalists will also receive awareness and publicity for the mission of their organization through media materials, social media coverage, event press and newsletters.

“We are extremely proud of Alan for making it so far in the award selection process,” said Robyn Chiarelli, Executive Director of the Downtown Fort Lauderdale TMA. “We at the TMA feel that Alan embodies the qualities of a strong, accomplished and outstanding community leader.”

Since Hooper joined the Sun Trolley Board of Directors 12 years ago, the Sun Trolley fleet and service has grown substantially to 20 vehicles and eight routes. As part of fostering the growth of the system, Hooper helped launch the Riverwalk Water Trolley, the first on-demand boat shuttle service in Broward County. Also, Hooper’s leadership incited a new private charter service, launched last year, which is projected to provide a steady source of income for the TMA for years to come.

“Alan is a smart and strategic thinker with a deep-rooted connection to and passion for greater Fort Lauderdale,” said Chiarelli. “He figuratively and literally invests in his community.”

This is apparent through his 1991 founding of Hooper Construction, which has overseen 1.2 million square feet of redevelopment. He is also co-founder of The Restaurant People, a dining, entertainment and hospitality firm that owns and operates several venues and restaurants in Fort Lauderdale, including YOLO, Vibe Las Olas and Tarpon Bend Food & Tackle. In 2014, Hooper won the Sun Sentinel’s Excalibur Award for Small Business Leader of the Year in Broward County.

New Year’s Day – Sunday, January 1, 2017: Service suspended on all routes except the Beach Link, which will operate on it’s normal schedule

New Year’s Eve – Saturday, December 31, 2016: Normal schedule plus additional vessel during the second shift and service extended until 1:00 a.m. for both the regular vessel and the additional vessel

Time: All day, every day, for the week

What streets does this event affect specifically? Eastbound Las Olas Boulevard between S.E. 3rd and S.E. 4th Avenues is being closed for a sewer main repair beginning Sunday, December 4th at 6 p.m. through Friday, December 9th at 5 p.m.

Route that will be affected? Las Olas and Airport

What streets does this event affect specifically? Closing SW 2nd Street between SW 5th and 4th Ave. (In front of the Museum of Discovery and Science)

Route that will be affected?  Las Olas

Route that will be affected? Las Olas

Sun Trolley’s Robyn Chiarelli talks about the Beach and Las Olas Link and how guests can make their way around Fort Lauderdale in an easy and efficient way, by using the free tracker app and the Wave ‘n’ Ride system.

Costumes are a must! There will be prizes!

It was strategic thinking and preparedness that led the TMA to park their trolleys in the parking garage at Fort Lauderdale City Hall.  “We wanted to protect our vehicle assets so we were able to provide regular trolley services after the storm passed and especially if we were called upon to assist in transporting evacuees,” said Robyn Chiarelli, Executive Director of the TMA.

When the call came in from officials that Broward County was “all clear” and the worst of the hurricane had passed, Sun Trolley operators jumped into action. After working tirelessly preparing for the storm, they returned to their vehicles to assist those left at the shelter without viable means of transportation to return home.

“We were in the right place at the right time and have a truly gracious team of drivers who are dedicated to serving the members of our community,” said Chiarelli. “Sun Trolley drivers Samuel Munroe, Jerry Pierre, Brenda Tucker, Nixon Thelot are a few of our local heroes.  They were willing to put others before themselves in the face of the storm.”

The Sun Trolley worked closely with Captain Bill Schultz of the Fort Lauderdale Police Department. Captain Schultz sincerely thanked and appreciated the Sun Trolley and their drivers for their assistance and service.

The Sun Trolley fleet has been providing affordable, and on most routes, free community transportation services to greater Fort Lauderdale for twenty-five years. “We are in fact celebrating our 25th anniversary this year,” said Chiarelli. “I attribute the system’s success to our team and moments like this – lifting the community up by providing viable transportation solutions.”

The Sun Trolley is a “Wave ‘n’ Ride” service. Passengers simply wave at the driver from anywhere along the route to board and then let the driver know when they would like to disembark. Passengers are encouraged to download the free Sun Trolley Tracker App on their smartphone to track the trolleys in real-time.

To download printable route maps and learn more visit http://www.suntrolley.com/ or call 954-TROLLEY. Like what Sun Trolley is doing? Show it at facebook.com/sun-trolley. 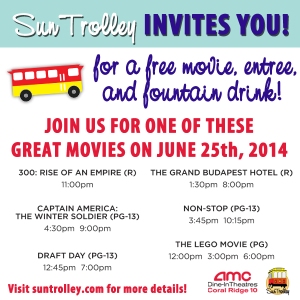 Sun Trolley and AMC Dine-In Theatres Coral Ridge 10 invites you for a FREE movie, entrée and fountain drink on June 25, 2014. AMC has combined a new movie theatre and restaurant into one incredible “movies with a menu” experience – AMC and Sun Trolley want to celebrate that by offering you this great deal.
PLEASE NOTE
Click Here to download the flyer you need to print out and bring with you to the movie theater to redeem your two free movie tickets, entree and a fountain drink for up to two people. You can choose from a selection of movies that include 300: Rise of an Empire, The Grand Budapest Hotel, Captain America: The Winter Soldier, The Lego Movie and more.
YOU MUST ALSO RSVP for the movie of your choice by sending an email to eventRSVP@amctheatres.com.
For more information call 954-761-3543 or visit www.suntrolley.com.

The millions of dollars spent on marketing the Sunshine State is paying off.
The Florida Restaurant and Lodging Association on Friday said the state is enjoying a $79.34 RevPAR (revenue per available room) rate, which is above the national average of $68.69. Growth in revenue is 8.3 percent for Florida in 2013 over 2012 versus 5.4 percent in the U.S.

“These Smith Travel statistics show that more and more visitors are staying in our hotels in recent years, and a direct correlation may be made that by increasing marketing dollars, more tourists are booking area hotels, eating at our restaurants, and enjoying all that Florida has to offer,” said FRLA CEO Carol Dover in a news release. “That is why the Florida Restaurant and Lodging Association is strongly advocating for $100 million in tourism and hospitality funding to support our continued efforts in getting heads in beds and butts in seats.”

suntrolley
Create a free website or blog at WordPress.com.