Sun Trolley and AMC Dine-In Theatres Coral Ridge 10 invites you for a FREE movie, entrée and fountain drink on June 25, 2014. AMC has combined a new movie theatre and restaurant into one incredible “movies with a menu” experience – AMC and Sun Trolley want to celebrate that by offering you this great deal.
PLEASE NOTE
Click Here to download the flyer you need to print out and bring with you to the movie theater to redeem your two free movie tickets, entree and a fountain drink for up to two people. You can choose from a selection of movies that include 300: Rise of an Empire, The Grand Budapest Hotel, Captain America: The Winter Soldier, The Lego Movie and more.
YOU MUST ALSO RSVP for the movie of your choice by sending an email to eventRSVP@amctheatres.com.
For more information call 954-761-3543 or visit www.suntrolley.com.

The Sun Trolley has once again earned top community recognition for fostering mobility and growth in greater Fort Lauderdale. On Friday, May 2, 2014, the Sun Trolley, administered by the Downtown Transportation Management Association (TMA), was named the “2014 Small Business Nonprofit of the Year” by the Greater Fort Lauderdale Chamber of Commerce.

“On behalf of TMA staff, our Board of Directors, community partners and stakeholders, we are incredibly thankful for this award,” said Patricia Zeiler, Executive Director of the Sun Trolley. “This prestigious award recognizes the leadership, integrity and management skills necessary to operate a successful business – our success is completely a bi-product of our pro-active Board of Directors, our dedicated staff and unwavering support from our community partners.”

Both Gilda’s Club South Florida and Rebuilding Together Broward County were named as finalists in the Chamber’s small business nonprofit awards category.

In addition to this award, Patricia Zeiler, was also named the 2014 Nonprofit Leader of the Year at the Annual 211 Broward Academy Awards in March 2014.

To download the Tracker app, printable route maps or to learn more visit http://www.suntrolley.com or call (954) 761-3543. Like what Sun Trolley is doing? Show it at facebook.com/sun-trolley. 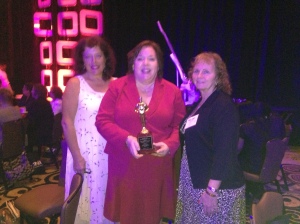 A very special congratulations to Patricia  Zeiler, Executive Director of the  Downtown Fort Lauderdale Transportation Management Association (Sun Trolley),   who was selected as the 2014 Nonprofit Leader of  the  Year!  Sponsored by  Broward College, this important  award recognizes leaders who work to push their   organizations forward, manage them efficiently and  practice positive collaboration  with many of the 5,800  nonprofits that operate within Broward County.

“To be in such great company with the other finalists in itself was an honor,” stated Zeiler. “I am just so thankful to 211 Broward, PNC Bank and The Wasie Foundation for bringing the community together to recognize Broward County’s nonprofits  – I will forever remember this day and how grateful I am to be recognized and selected as the 2014 Nonprofit Leader of the Year.”

To view all the winners of the 2014 Nonprofit Academy Awards click here to read the  article that ran in the Sun Sentinel on February 28, 2014.

Earlier this month Patricia was also recognized as a “Women in Transportation” by the U.S. Department of Transportation. To view her video please click here.

To learn more about the Sun Trolley or to connect with Patricia visit www.suntrolley.com.

When commuters look at the Sun Trolley, they see safe, alternative transportation to single occupant vehicles. When Patricia Zeiler looks at it, she sees something that “makes a good city great.”

“Transportation excites me because it brings people together from many, many different communities. They meet in transit. They exchange ideas. It’s the happening place,” said Zeiler, Executive Director of the Downtown Fort Lauderdale Transportation Management Association, the non-profit organization that manages the Sun Trolley.

Zeiler’s passion for the Sun Trolley has made her as a finalist for Nonprofit Leader of the Year in 211 Broward’s Annual Non-Profit Academy Awards.

“On our NW Community Link Route alone, we provide free transportation for approximately 10,000 people a month who need basic services. That’s our mission – to provide accessible and reliable transportation to support the community,” said Zeiler.

On Friday, February 28 at 11 a.m. the Seminole Hard Rock Hotel & Casino in Hollywood will host Zeiler and her fellow Academy Award nominees as they strut down the red carpet amid search lights and golden statuettes, before finding out who will take home the top honor. 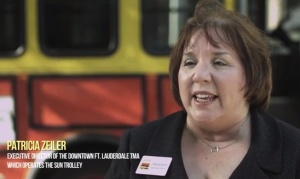 Zeiler is also one of many women leaders in transportation being celebrated by U.S. Transportation Secretary Ray LaHood in a new video series on the U.S. Department of Transportation’s YouTube channel.

“By showcasing the exciting career opportunities available, and the tremendous possibilities for success, we hope more women and girls will consider choosing careers in transportation,” wrote LaHood on his blog, Fast Lane.

The Sun Trolley ended 2013 with a bump in ridership carrying 49,265 passengers across all seven routes in the month of December.  “Our monthly ridership averages approximately 40,000 passengers per month,” states Executive Director, Patricia Zeiler, “Breaking the 49k mark is an indication that the snow birds are officially back in S. Florida for the winter and our ridership is increasing.” Additionally, Sun Trolley ridership tracking data (in comparison to December 2012 ridership) shows a 2,000 passenger increase solely on the Las Olas Link Route for the month of December due to holiday tourists and visitors. 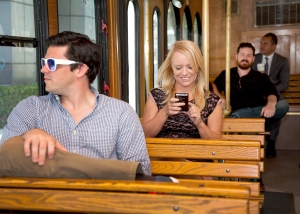 How is Trolley Ridership Calculated?

Not only do Sun Trolley drivers use a clicker to count every passenger who boards the trolley, but secret riders who are  staff of Broward County Transit, FDOT and Florida Commuter Service ride the trolleys to validate ridership, conduct safety inspections and obtain rider feedback.

Coming in 2015 the Sun Trolley will be adding on-board cameras which will further ensure passenger safety, and also allow TMA staff to spot check and confirm riders.

It’s no secret that the population in downtown Ft. Lauderdale doubles to more than 300,000 people Monday through Friday. And with the increasingly popular Flagler Village in the north quadrant of the city, more and more professionals are snatching up lofts and apartments in this burgeoning arts district.

Sun Trolley’s expansion of the Downtown Link Route makes it possible for a resident to leave one’s home in Flagler Village, travel to Las Olas for work or play, continue on to Broward Health Medical Center and back to Flagler Village – all without a car.

“Flagler Village has seen a huge increase in density over the past decade,” states Alan Hooper of Hooper Construction. “What was once an inactive and uninspired area of Ft. Lauderdale is now seeing revitalization – and that is leading to new business development, beautification projects and an up and coming arts district for Ft. Lauderdale.”

The expansion of the Downtown Link Route is funded through a Service Enhancement Grant program through FDOT. FDOT believes that Sun Trolley’s downtown expansion will alleviate congestion on Andrews Avenue and SE/NE Third Avenue and will encourage professionals who work in downtown to make connections via public transportation.

In addition to the expansion of Sun Trolley’s Downtown Link Route, the Sun Trolley offers six additional routes that help residents and tourists travel in and around greater Ft. Lauderdale.

“Our monthly ridership averages approximately 40,000 passengers,” states Zeiler. “That’s 40,000 individuals who utilize the trolleys to get to AIA, the Harbor Shops, Broward Center for the Performing Arts, Las Olas, the Courthouse, outlying neighborhoods like Melrose Park and even Life Net for Families and the Department of Children & Families at Plantation Hospital.”

To track the trolleys (IN REAL-TIME!) along any of the seven routes simply download the award-winning Sun Trolley Tracker App. This mobile app for Android and iPhone users, provides real time location of all trolleys.

To download printable route maps, the mobile app or to learn more visit www.suntrolley.com or call (954) 761-3543. Like what Sun Trolley is doing? Show it at facebook.com/sun-trolley.

“Being on the cutting edge of digital media has not only helped the Sun Trolley grow its ridership, which averages approximately 40,000 passengers per month, but it has allowed us to communicate more efficiently with our passengers as well as increase corporate sponsorships and partnerships.”

Sun Trolley’s Facebook Page
Sun Trolley’s ever-popular Facebook page has become a fan favorite for both residents and tourists alike approaching nearly 2,500 Likes. “Our page is popular because it really serves as one-stop shop for messaging,” states Zeiler. “We make an effort to post about local events, restaurant openings, transportation trends and we use the page to announce route changes, delays and fare adjustments – it really has become the go-to resource for our passengers.”

To download the mobile app, printable route maps or to learn more visit http://www.suntrolley.com or call (954) 761-3543. Like what Sun Trolley is doing? Show it at facebook.com/sun-trolley.